Dear Friends,
I hope that this newsletter finds you well.
We find ourselves in the month of May, dedicated to our Blessed Mother.  Mary, as mother of our Lord and our mother, is the model disciple.  The Church is Marian.  That might seem an odd thing to say, as if I were placing Mary above Christ.  On the contrary, the to say the Church is Marian means that the Church stands in radical openness to say, “Yes” to God.
Every year when I used to teach the RCIA class on the Church at the parish, I would tell this story from Timothy Cardinal Dolan about the blessing of a new soup kitchen.  He came six months after it was opened, as his schedule allowed, and someone said to him, “It’s nice for the Church to finally show up.”  He said, “The Church has always been here because you are here.”  He was pointing out a false notion of what Church is--the hierarchy.  Very often we emphasize the Church hierarchy as the central aspect of the Church, and the hierarchy certainly has an essential role to play in passing on the sacraments and teaching.  However, the hierarchy does not exist for its own sake.  It exists to make us more like Mary, open to the word of God by grace.  The Church’s members are to become more like the spotless bride that the Church already is and has been since Mary, the first disciple, said, “Yes” to the message of the Incarnation.
In the history of the Church, when crises arise, the reason that the only true reformers are the saints is because only the saints form the Church to be more like Mary.  Reforms of structure, as important as they may be, still must serve the ultimate purpose of the Marian dimension of the Church.
This month we begin our ordination season.  Due to the COVID guidelines of six-feet spacing between households and the large ordination group we have this year, the ordinations are ticketed events.  Links to watch online are available below.
In other news, we are looking forward to having our first Quo Vadis Days, which we are joining with the Archdiocese of Boston to host.  They have been doing this now for several years, and collaboration will make the event stronger than if we hosted on our own.  QVD is a four day overnight camp for young Catholic men of high school age (13-18).  It serves to connect them to other young men striving to live lives of virtue, to deepen their faith, grow in virtue, learn more about what it means to be a Catholic men in our world today (whether single, parent, or priest), and better discern God’s call in their lives.
Also, this month on May 5, we have a traveling holy hour at 7 PM at Saint Dennis in Douglas.  I hope you can join us.
You will all be remembered in my prayers this month in a particular way when I pray my daily rosary.  Please pray for me as well.
Sincerely,
Father Donato Infante
PS If you received this newsletter by e-mail forwarding and would like to sign up, please visit our website by clicking here.
Contact Info:
director@worcestervocations.com
508-630-4473
May 15 at 10 AM - priestly ordination of Deacons Ardila and Carvajal


May 29 at 10 AM - diaconate ordination of James Boulette, Thiago Ibiapina, and Derek Mobilio 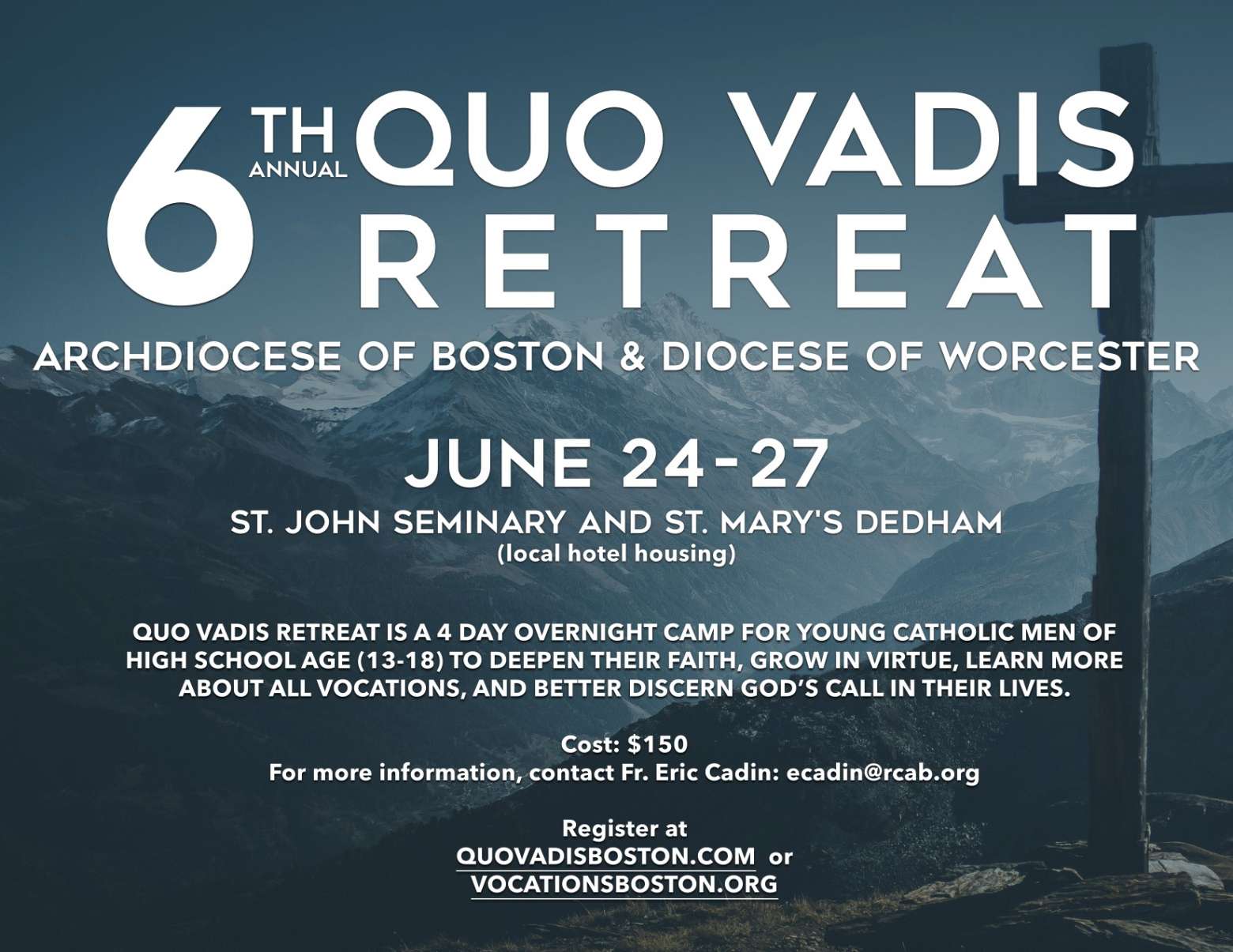 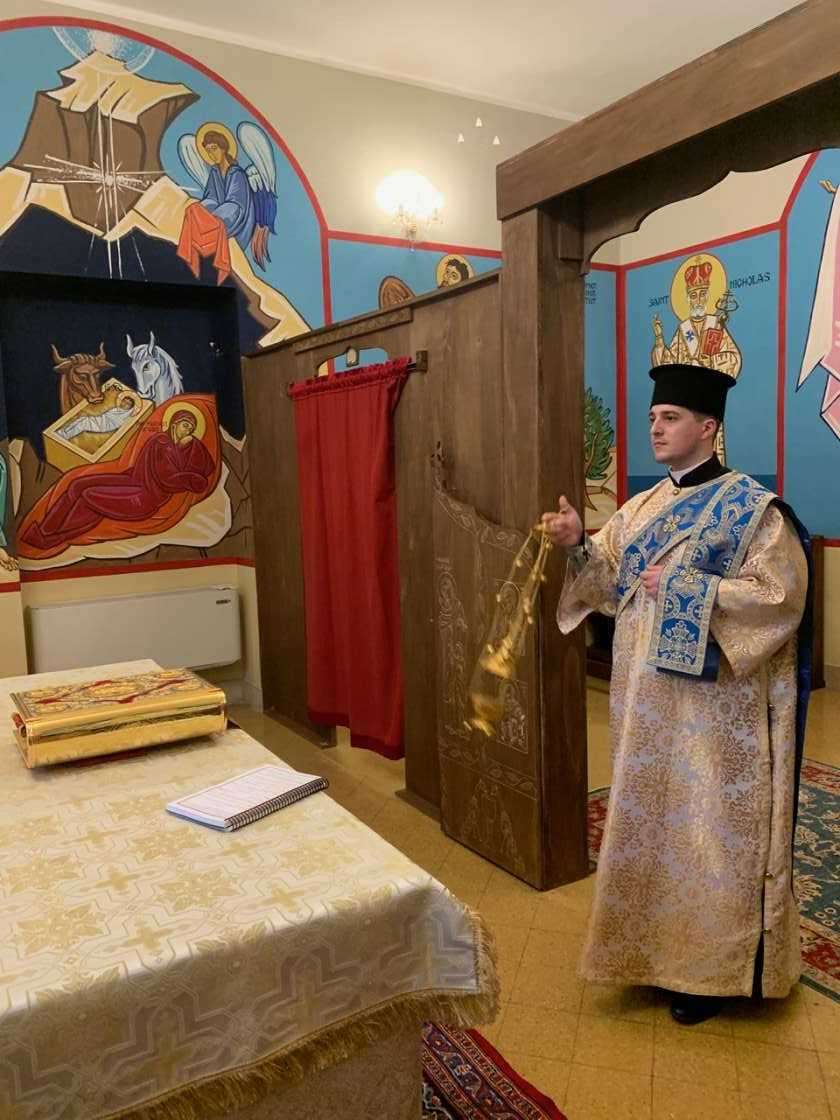 Know Your Rites
Rev. Mr. Lucas LaRoche
“I’ll be there with bells on,” one guest told me regarding my diaconal ordination. Whereas most people use that phrase figuratively, this guest did not. And so, Saint Paul’s Cathedral was graced with the presence of a Greek Catholic bishop that Saturday morning and, yes, a Greek Catholic bishop’s vestments have bells on them. And while how the Greek Catholics vest and worship is different, they are nonetheless still members of the Catholic Church.
While you (presumably) and I are members of the Latin or ‘Roman’ Catholic Church, there are also Catholics of twenty-three different Eastern Catholic Churches, which are Catholic counterparts of various Orthodox Churches. Eastern Catholic number eighteen million in the world today and their Churches, following the ancient traditions of Constantinople, Alexandria, and Syria, are located throughout their historic lands and also have a presence wherever their people have moved, including the United States.
I first encountered the Melkite Greek Catholic Church in Worcester, at Our Lady of Perpetual Help church on Hamilton Street (Worcester also hosts a Maronite Syriac Church on June Street). After meeting the people and clergy of Worcester’s Melkite community, when I was assigned to Saint John’s Seminary in Boston, I got to know the Melkites in Boston. Upon moving to Rome, I began to help a priest of the Ruthenian Catholic Church who works at our seminary and assist at Rome’s Russian Catholic Church. With my ordination to the diaconate in June of last year, I’ve been able to help in a new way by serving as deacon at their respective Eucharistic Celebrations (which they call “the Divine Liturgy” instead of “Mass”).
This experience, while a bit unusual, has been rewarding: New experiences are often uncomfortable but usually broaden our understanding. My experience with the Eastern Catholic Churches has provided me with a greater appreciation of the legitimate diversity of the Catholic Church and its members.
If you ever visit an Eastern Catholic church, you may find that things are very different, perhaps even radically different, than what you’re used to at your own parish. While these differences are striking, they’re not the point of my little exposé; I’d instead like to focus on one difference that you will certainly find but is less significant. This difference is singing.
We’re used to singing at Mass in our own parishes, but less often we sing the Mass. What I mean by this is that we sing the parts of the Mass (the readings, the prayers, etc.) less often than we sing hymns at Mass. In the Liturgies of the Eastern Catholic Churches, it’s rare to find hymns as we think of them; instead, you’ll find the priest and the congregation singing the prayers of the Liturgy to each other. In fact, it’s strange when words are spoken at the Liturgy (besides the homily and maybe the readings besides the Gospel). The entire hour is passed with the priest, the deacon, and the people singing to each other.
This isn’t meant to make things longer or something new, but it’s part of the experience of the Liturgy that touches all the senses: You hear the music, see the icons, smell the incense, stand and bow regularly, and taste the bread and wine used for Holy Communion: These things immerse you into the experience of worship, which is the experience of the Kingdom of God.
I’m a deacon of the Latin Catholic Church, and I’ll be ordained a priest for the Diocese of Worcester in a few months’ time, yet my experience over the past years with the Eastern Catholic Churches has shown me that the variety of legitimate tradition in the Catholic Church is wider than we’d imagine; The experience of authentic Catholic traditions helps us to break our own preconceptions of the Church and understand what ‘catholic’ really means. 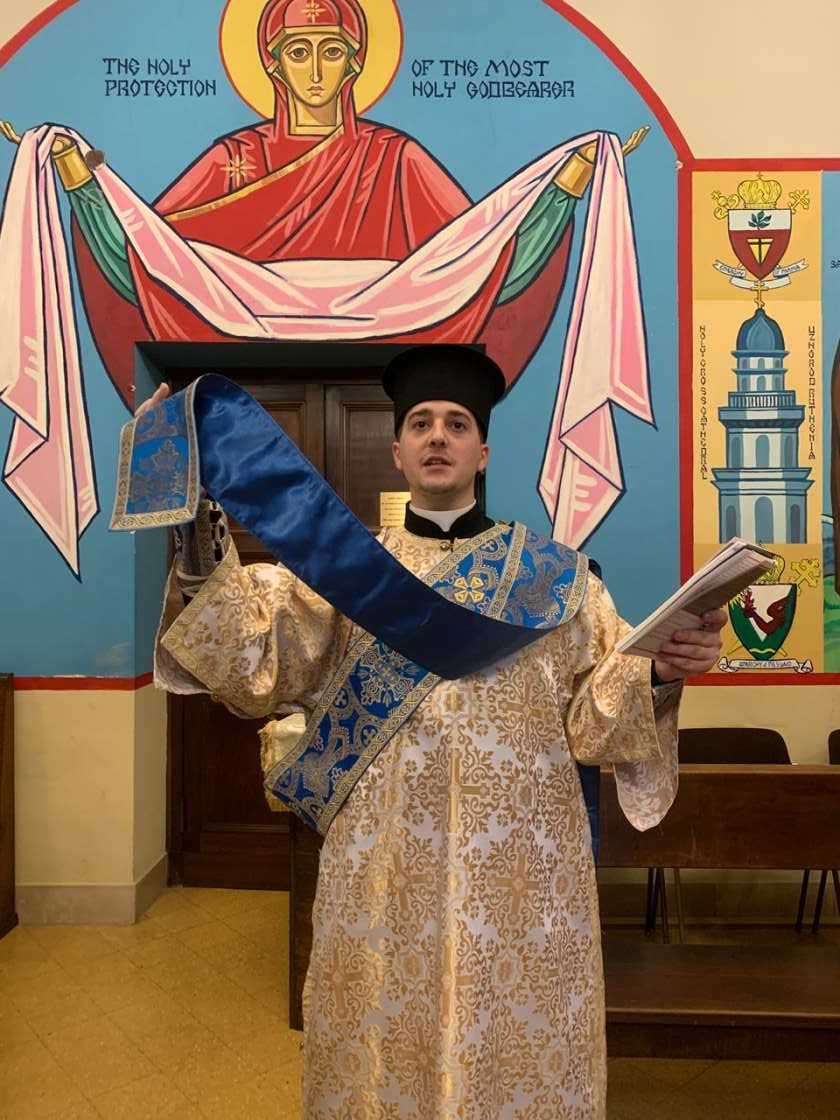 Sent by Father Donato Infante on Sunday, May 2 at 3:01PM